If you are a fan of the show, you will (hopefully) recognize this cake.  Otherwise, you may be forgiven for thinking it is a swimming pool with a man jumping in :) 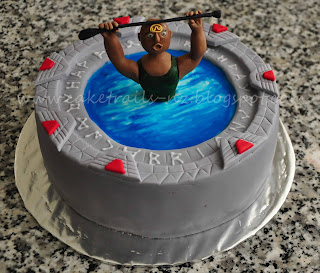 I made this cake for my hubby who is a fan of the show.  It didn't start off as a stargate though.  We had a long discussion (as we usually do) about what he would like for his birthday cake this year, and it always comes down to these themes: Star Wars, Star Trek, Stargate or Lord of the Rings.  Well, the original plan was Minas Tirith from LOTR but I wasn't sure about making a 7 layer cake.  Then we decided on the Enterprise from Star Trek, which then changed into a hobbit hole (LOTR again) and finally into Stargate.  That was straightforward enough, I thought.  And with so many wonderful ideas on the net from people who had made a Stargate cake (yes there are quite a few!), I started on the cake.

The cake is a chocolate mud cake covered in chocolate ganache.  It has 3 layers, and for the top layer I cut out the centre before placing it on the cake.  Then I cut into the inside of the ring to make it dip a little.  There is an excellent video on You tube by someone who made a Stargate cake.  She shows you how to cut into the ring, which I found very useful.
Here is the cake already iced with some ganache. 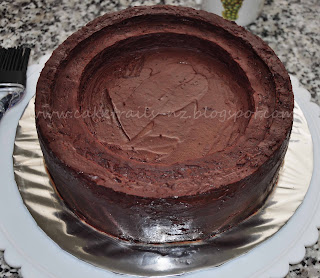 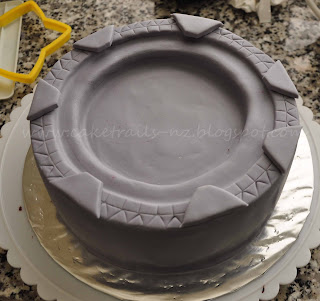 I then made some markings on each triangle with a spatula and added some red fondant to complete it.  I struggled a little with the event horizon (middle bit).  I thought of using blue jelly, marshmallow icing or piping gel and I am sure it would have looked great but in the end I went with something I had which was royal icing.  I filled the centre with white icing and piped a border of blue around it.  Then using a toothpick and brush, I blended them together till I got the effect I wanted.  On hindsight, I could have made the lines more wavy than straight.  To complete the cake, I used the rest of the royal icing to pipe the letters on the cake as well as some of the symbols from the Stargate. 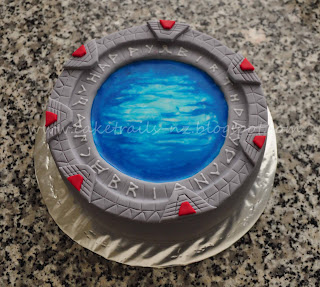 Of course, hubby had to decide that it would look more exciting to have one of the characters jumping into the wormhole so Teal'c was made, carrying his staff weapon. :)  I made him using my basic tutorial on "How to make a simple fondant figure". 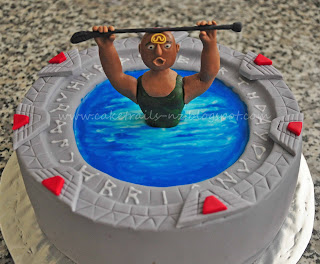 I did use some wire support for the arms as it was made last minute but luckily he stayed upright ok.
Here is the cake lit. :) 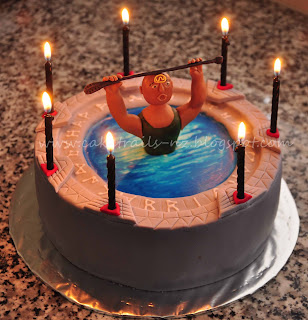 Pretty cool, huh?  Well hubby thought so, thank goodness!  Are you a fan of the show?