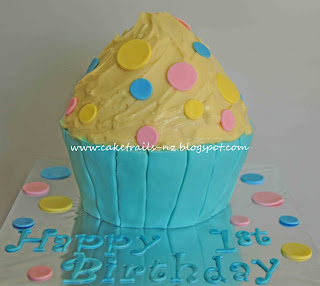 I finally got to try out my new giant cupcake pan from Baker's Secret.  After reading all the recommendations online on whether to bake the top and bottom half of the cake at the same time, I went with the 10-15 minute gap by baking the bottom half first for 10 minutes then adding the batter to the top half after that.  Both halves baked almost to the same time after that.  The only issue I had was trying to get it out of the pan all in one!  I should have greased and floured the pan but decided to go ahead and not do it.  Big mistake!  Always grease and flour your pans before adding the batter and the cakes with pop out with no issues.  Anyway I did finally get most of the cake out in one piece, thank goodness.

This cake is carrot cake with loads of cream cheese icing on top as well as in between the top and bottom halves.  Bottom half is covered in strips of fondant and the top is sprinkled with giant sprinkles made from fondant circles.  I did try rolling a large strip of fondant around the bottom half but it came out looking like a bowl instead, hence the individual strips.  Will have to try again, maybe with buttercream icing as cream cheese is rather soft and doesn't give a good undercoat.  Tasted yummy though! :)