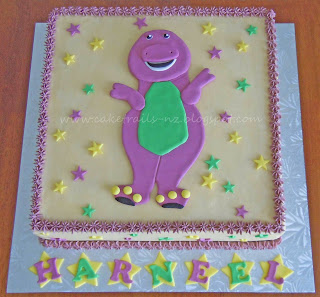 I made this cake for my friend's little boy who was turning two.  He loves Barney and it was so cute watching his expression when he saw Barney on the cake.  I am glad he liked it. :)  His mum wanted something simple, a square cake with an edible image.  Since I don't own an edible printer, and I couldn't find a suitable edible image online or in the shops, I decided to make one out of fondant.
The rest of the cake is covered only in buttercream as that was what his mum wanted.  I added fondant stars using a plunger star cutter ( so useful!) and made his name with bigger stars from a cookie cutter set.

Barney was very easy to do.  The method is similar to what is known as bas relief.  It is basically layering parts of the body to give it a raised 2D look.  This is how I did it.  I first found a suitable image of Barney and cut his whole body out of purple fondant.  Then I cut out only his tummy in green and pasted it on top of the purple fondant on where his tummy would be following the image.  I cut out his arms again in purple as well as his head.  The eyes, mouth and nose were done after that and so were his toes.  Quite effective and a great alternative to not having an edible image.   I completed the cake with buttercream piping around the border using a star tip (Wilton tip 21).  And that was it!  Have you tried bas relief before?